“Today we say to American business:
invest in Burma and do it responsibly.”

-- U.S. Secretary of State Hillary Clinton on May 17, 2012 announcing the suspension of US sanctions on Myanmar. -- 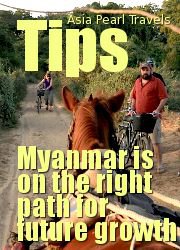 This is the moment we have been waiting for. United States has "suspended" its sanctions over Myanmar following the recent moves by European Union and Canada. US companies are expected to join Asians and Europeans who already have a head start in Myanmar-- the last frontier market with the population of 60 million, as well as potential manufacturing base to export goods around the globe with inexpensive labor force.

Ford Company and General Electric Co are among the US Fortune 500 companies lining up to take opportunities of the new "openness" in Myanmar. Openness? Yes, Myanmar is now "open" for business, investment, profits, and good times. Welcome to Myanmar! We will be waiting for you. Meanwhile, Derek Mitchell is expected to be nominated as the US embassador to Myanmar.

The latest good news that we are hearing are "irreversible". We will have more "good news" more frequently as time goes by. 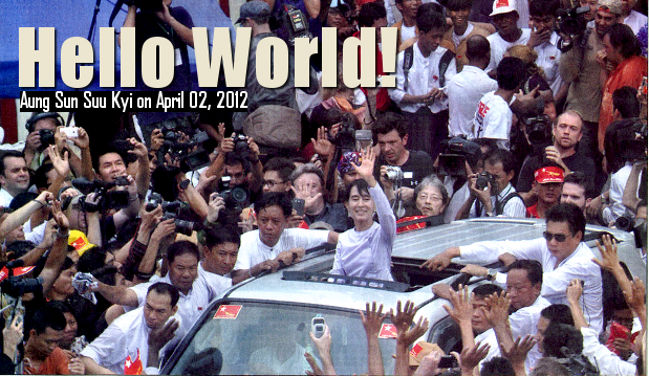 In early April, we have a few significant "good" news that are worthwhile updating. The first concerns directly with travelers to Myanmar. Starting April 01, 2012, foreigners are allowed to bring in the currency up to equivalent of USD 10,000 (in any currency) without declaring to customs at the airport. Previously, it was USD 2,000.

The second good news is the ongoing saga about the bright future of Myanmar. National League for Democracy (NLD) led by Aung Sun Suu Kyi had participated in April 1st by-elections, and won by a land-slide victory in most of the over 40 seats contested. The Obama administration noted this "important step" towards democratic reforms, and hopes for a greater openness and transparency.

UN spokesman Martin Nesirky has expressed his strong belief that "these by-elections are a boost for the ongoing reforms and a very important step towards a more peaceful and democratic future in Myanmar."

ASEAN has given a full support for Myanmar calling for an end to European sanctions on Myanmar. US Secretary of State Hillary Rodham Clinton on April 4th announced the lifting part of the sanctions that include allowing the export of US financial services to Myanmar, and lifting of visa ban on senior Myanmar official to the US. In addition, Washington plans to open an office for International Development Agency in Myanmar, and step up the diplomatic relation by appointing an embassidor to Myanmar.

So, Myanmar is going to enter an auspicious New Year in mid April with those latest good news. We wish everyone a happy "Thingyan".

This has paved the way for lifting of economic sanctions by the Western nations. In January, Myanmar has seen unusual numbers of well-known foreign public figures visiting the country, including US Billionaire investor George Soros. 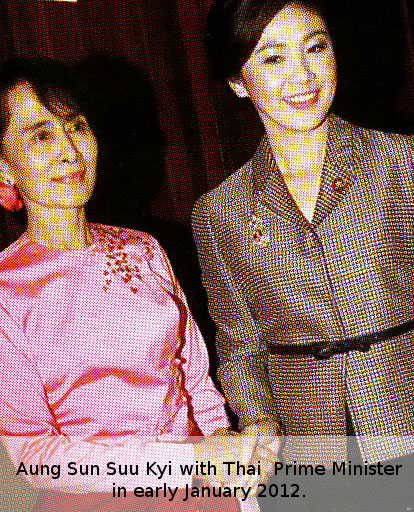 These days, it has become difficult to keep track of all the foreign representatives and politicians rushing into the country. French Foreign Minister Alain Juppe, Japanese Foreign Minister Koichiro Gemba, Singapore Minister for Foreign Affairs & Law K Shanmugam, Indonesian Foreign Minister Marty Natalegawa, German Deputy Foreign Minister Dr Wener Hoyer, British Secretary of State for International Development, Andrew Mitchell, and British Foreign Secretary William Hague are among them. It's worth mentioning that visit by the British Foreign Secretary to Myanmar (Burma) is the first time in more than 50 years, just like visit by the US Secretary of State to this country. And, we are not counting the usual state visits from neighboring China, India, Thailand, Laos, Vietnam, Cambodia and Bangladesh.

Former Australian PM and former Foreign Minister, Kevin Rudd was way ahead of the pack, visiting the new elected government in July 2011. Could it be that certain foreign politicians and business leaders are equipped with special sense of smell for new opportunities?

( If you are an entrepreneur, investor, trader, manufacturer, or a manager looking for new opportunities, cost saving ideas, potential market growth areas to sell your products, or purchasing Myanmar products and raw materials, get your first foothold in Myanmar by visiting our business page. )

What does this all translate to? -- Signs of political and economic stability, national reconciliation, followed by creation of new jobs and opportunities for the people; investments, trades, prosperity and growth for the future of this country within a couple of years.

US president Obama has spoken to Aung Sun Suu Kyi over the phone from Air-Force One for the first time on November 17th, 2011 on his way to Bali to attend ASEAN APEC joint meeting. Obama has written open letters to Myanmar President Thein Sein and Aung Sun Suu Kyi to support the democratic reforms in Myanmar.

Hillary Clinton's 3 day visit to Myanmar is the first in 50 years for the US Secretary of State.

“We report only good news that are worth updating.”