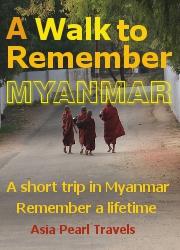 Just a perfect trip to experience a breath-taking view of Bagan temples and relaxation at the famous Inle Lake, where fishermen live in simple life-style and use a unique one-legged way of rowing their boats. Simple things in life sometimes alter our views and perspectives of the world, and our lives are forever changed. A walk in Bagan. A walk in Inle. A memorable walk around Shwedagon Pagoda in Yangon. This is a walk that you will remember. A short trip in Myanmar, remember a lifetime. Only from Asia Pearl Travels.

Upon arriving Yangon International Airport, our guide will meet you and take you to the hotel.

In the beginning of the 20th century, the British had transformed Yangon (then known as Rangoon) into administrative center of East Indian Empire. Back then, it was a jewel of the empire, with impressive buildings, wide avenues, attractive lakes, and well-maintained parks; its infrastructure and public services are said to be on par with London.

Time has changed since then. Burma has gone through trying times of Socialism, hardship under military rule, and now a great expectation for a better future, with a new government listening to the cries of the people. In the fond memory of most Burmese adults, Yangon has always been the capital of Myanmar. And, even after the government has moved most of its administrative functions to a newly-built capital of "Nay Pyi Daw", Yangon remains the busiest commercial hub and the largest city in the country with population of more than 5 millions.

The Yangon regional and municipal government is now making efforts to "beautify" the city by white-painting and restoring historical buildings in the downtown areas. Clean-up efforts are underway to make Yangon more orderly, and less congested. Sprawling new high-rise commercial buildings and apartment complexes, as well as newer model cars in the streets of Yangon are positive signs that the city is gradually leaving behind its unkempt image of the past, and slowly entering a new era of prosperity in the market economy. 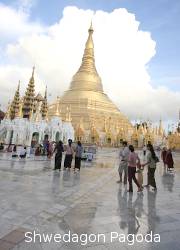 Its fascinating colonial past, spiritual heritage, on-going history in the making, as well as welcoming charms of local people towards visitors make Yangon the most worthwhile city to visit in South East Asia. You are making the right choice by visiting Yangon with Asia Pearl Travels.

As for today, we will first visit Chaukhtatgyi colossal reclining Buddha image and Botahtaung Pagoda, with the enshrinement a hair relic of the Buddha, according to local oral history.

We will take you to Kandawgyi Lake located half way between downtown Yangon and Shwedagon Pagoda. There are a number of restaurants, tropical tress with shades, botanical gardens, swimming pools, and walking paths for a relaxing stroll in this area. From the vantage point, you can get a photo shot of this lake with Shwedagon Pagoda and Karaweik in the background.

[See Kandawgyi Lake during sunet with Shwedagon Pagoda and Karaweik in the background.]

Visit Shwedagon Pagoda, which without a doubt, is the world's most fascinating and the most precious golden stupa. Local history claims it is 2,600 years old ( anniversary falls somewhere between February to early March 2012), while western historians came up with somewhat different age. But, no one will dispute that it is a grand symbol of faith and devotion to Buddhism.

Remove your footwear in accordance with the local customs, and we will have a memorable walk on the ground of Shwedagon Pagoda. Take a look at that golden dome, which rises 98 meters above its base. The glittering surface of the pagoda is covered with 60 tons of pure gold, and decorated with numerous precious stones, such as jade, ruby, sapphire and diamond, including a 76 carat solid diamond on its top. A walk around Shwedagon Pagoda will certainly be an experience that you will remember for a long time. [See photo of US Secretary of State Hillary Clinton's visit to Shwedagon back in November 2011.]

After breakfast at the hotel, transfer to the airport for your Bagan-bound flight. Bagan, founded as early as in 849 AD on the banks of the Ayeyarwaddy river is about 500 km (more than 300 miles) north of Yangon.

Upon arrival at Nyaung U airport, our driver will take you to enchanting Nyaung U market. Check in at the hotel. Our first destination will be Shwezigon, a major monument and prototype of the later Myanmar stupas. Shwezigon was built by Anawrahta, arguably the most powerful king of Burma's recorded history.

Visit Ananda Temple, the best preserved master-piece of Myanmar architecture; nearby Ananda Oakkyaung, one of a few surviving brick monasteries; Thatbyinnyu, the tallest temple in Bagan; and Gawdawpalin, the most massive and imposing monument in Bagan.

Visit one of traditional Lacquer-ware workshops to observe the process of making those unique Myanmar handicrafts.

You will be traveling with an air-conditioned vehicle, and on a local horse-drawn cart if you wish. But, of course you will also be on foot to explore temples after temples, which seem to be everywhere on the horizon.

As the evening comes, you will walk on the ground of one of the ruins to watch a spectacular sunset, wondering whether if this is for real or a dream. So, this is Bagan! It's just like the one you have seen in pictures, and now you are in it! This is the walk that you will remember for a long, long time.

Overnight at Thazin Garden. (B)

After breakfast at the hotel, transfer to the airport for your Heho bound flight. Upon arrival at Heho airport, meet your driver and proceed to Inle Lake --the second largest natural lake in Myanmar.

Inle Lake is located in the middle of the crater in Nyaungshwe Valley between the two parallel mountain ranges running North to South in the South-Western Shan State.

Check-in at the hotel, freshen up, and board on a traditional long and narrow motorized boat for a sightseeing tour of the lake. Be amazed by awesome Inle fishermen with unique one-legged rowing style-- one of a kind, and only in Inle.

[ Inle man demonstrating how to row the boat properly.]

In the afternoon, visit floating village of Ywama, where local merchants sell their handicrafts, fresh fruits, and other goods on boat. Floating market in Ywama is a major tourist attraction in Inle.

We will also take you to the weaving village of Inpawkhon and Ngaphechaung where a museum-like monastery ( Jumping Cats Monastery) is located.

Overnight at Paradise Hotel. (B)

[ See Paradise Hotel from the road.]

After breakfast at the hotel, transfer to the airport for your Yangon-bound flight. We will pick you up at the airport and take you to Scott's market-- a shopping place in Yangon with a history that goes back to the colonial days. This is where you can bargain for the best Myanmar souvenirs, and arts & crafts at reasonably low prices. The other items of interest to the typical tourists are jewelry, Lacquerware, wood and ivory carvings, tapestries, silverware, brassware, silk and cotton fabrics, and shoulder bags.

Yangon now has several new mordern shopping complexes and supermarkets, but probably none has the spirit and nostalgic feel of historic past that Scott's Market seems to give. It's only appropriate that your last walk in Yangon this time shall be here in Scott's Market. Will you remember Yangon? Will you come back? You will just have to find out.

Transfer to the airport in the late afternoon for your onwards departure flight. (B)

“We will introduce you to Myanmar that you will remember for a long time.”