Are you looking for a hotel in Mawlamyine? We can recommend you decent Mawlamyine hotels for your reservation. We have visited several places in Myanmar including Mawlamyine to pick those hotels and get contracts so that we can give you the best deals and low discount agent rates.

We can also give you a good advice about your travel to Mawlamyine from our own personal travel experience.

Visit Mawlamyine. In addition to making a hotel reservation in Mawlamyine, we can also arrange for you a road trip from Yangon to Mawlamyine in an air-conditioned vehicle. Check out our Mawlamyine itinerary.

IMPORTANT NOTICE: Due to challenging business environment, we are suspending our services. We will still honor and support our existing customers with advanced booking through service@asiapearltravels.com.

How many nights would you like to book a Mawlamyine hotel?

Located in downtown Mawlamyine on the bank of Thanlwin River at the corner of Kyaikthoka Pagoda Road and Strand Road. If you are looking for a decent and affordable budget hotel in Mawlamyine, this is the one.

Hotel has a restaurant, and standard services of a two star hotels including Laundry service and Limousine Service. 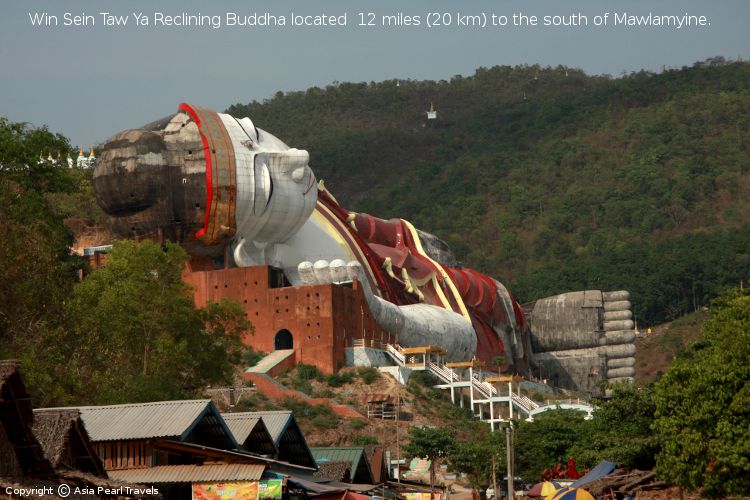 The British called this town "Moulmein". A road trip from Yangon to Mawlamyine is now possible with crossing over Mawlamyine bridge, the second longest Bridge in Myanmar. One of the World's Largest Reclining Buddha Statues is located around the area, and is a major tourist attraction.

Mawlamyine is only a few hours driving distance from Kyaikhtiyo "the golden rock" and Nwa La bo. Tourists also take a boat ride up Thanlwin river to Mount Zwekabin in Hpa-an.