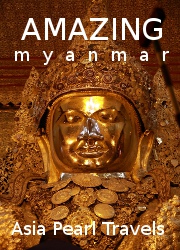 Myanmar is a fascinating country with rich cultural heritage. We will take you to Mandalay, the center of Myanmar art, culture, and tradition. Be amazed by Mahamuni Buddha Image covered with gold 6-inch in thickness, and be amazed by the World's Largest Book at Kuthodaw Pagoda. Then, we will cross mighty Ayeyarwaddy river to be amazed by one of the largest ringing bells in the World in Mingun. Be amazed by the beauty of Inle Lake and unique style of rowing boats. Be amazed by Shwedagon Pagoda covered with 60 tons of pure gold in Yangon. This will be a four day full of wonder and amazement!

We will pick you up at the Yangon International Airport and take you to your hotel.

Yangon is a city with a long history. It has started as a small village called Dagon, and the origin inhabitants were the Mon people. In 1755, Burmese King Alaungpaya from upper Burma had captured it, and effectively ended all the enmities and hostilities from the south, and thus re-named the village "Yangon", which is usually translated as "End of Strife".

After annexation of the lower Burma by the British in 1852, this village was transformed into a major port, and by the early 20th century, it has become the administrative center and the capital of Burma-- a modern city known as "Rangoon", the jewel of the British East Indian Empire.

Burma has gone through the Japanese occupation, back to the British colonial masters, independence, Socialism, military rule, and now a new civilian government. Today, Yangon remains the busiest commercial hub and the largest city in the country, despite the fact that the ruling government has moved most of the administrative functions to the newly-built capital of "Nay Pyi Daw".

Its rich historical background, as well as fascinating spiritual and cultural heritage make Yangon the most worthwhile city to tour in South East Asia.

As for today, we will first take you to Chaukhtatgyi colossal reclining Buddha image and Botahtaung Pagoda, with the enshrinement of what is believed to be a hair relic of the Buddha.

We will oontinue tour of Yangon with a visit to historic Strand Hotel and downtown Yangon, which is now being renovated. Seasoned travelers will notice newer vehicles on the road, and be amazed by the pace of changes taking place here, including relaxation on the control of the media and the Internet.

In the late afternoon, visit Shwedagon Pagoda, which undeniably, is the world's most fascinating and the most precious golden stupa. A visit to Myanmar without touring Shwedagon Pagoda will be like a trip to Egypt minus the pyramids. The golden dome rises 98 meters above its base, and is covered with 60 tons of pure gold, along with numerous precious stones, such as jade, ruby, sapphire and diamond, including a 76 carat solid diamond on its top.

After breakfast, board on your Mandalay-bound flight. Mandalay, known as Rathanabon, or "the Gem City" is the capital of the last kingdom. Today, it is still the center of Myanmar culture and tradition as it was more than one hundred years ago.

For generations, Mandalay is known for its skilled artisans and craftsmen with superb workmanship; their excellent works were once used in the royal courts.

Upon arrival at the Mandalay airport, meet our driver and proceed to Kyawzun jetty. Water buffaloes are still the workforce of this region, used as a mean of transport for the World's best quality teak wood. We will stop awhile to watch busy riverside activities before heading to Mingun on a privately chartered boat.

We will spend a short time in the old-age home for the poor in Mingun. The main attraction in Mingun is the Mingun Bell, an amazing engineering feat of the 18th century Burma, ranked among the World's largest ringing bells of all times.

The other tourist attraction in Mingun is Pahtodawgyi- unfinished temple of King Bodawpaya, which would have been even larger than those temples in Bagan, plus the Mingun Bell to be hung there, to surpass Bagan Temples both in size and in status.

Unfortunately, the king had allocated too much energy and resources in this project, putting the strains on farmers and ordinary people. The construction was stopped with the warning from the fortune-teller that the kingdom will certainly fall the very day the temple was completed. So, it never became the largest temple. Today, at best, it will probably qualify as the largest pile of bricks in the World, and it still is amazing to watch, nevertheless.

Other tour highlights are Settawya Pagoda with a marble foot print of the Buddha, Mingun Village, and Shinbume Pagoda, ( Sometimes spelled Hsinbume Pagoda), a pagoda with a new design idea built in the 18th century by King Bodawpaya in memory of one of his queen consorts.

Return to Mandalay and check in at the hotel. After lunch and a short rest, visit the most sacred "Magnificent Buddha Image" also known as "Mahamuni Buddha Image" at Bayagyi. This Buddha image is covered with gold leaves 6 inches in thickness, and decorated with invaluable jewels all over the body except on the face.

Our tour continues with a visit to gold-leaf production workshop. The craftsmen in Mandalay are the most skillful in the country in making gold-leaves used to cover the surface of the Pagodas, such as Shwedagon Pagoda in Yangon.

Proceed to the foot of the Mandalay Hill to observe one of the Wonders of Myanmar: "the largest book in the World" at Kuthodaw Pagoda, where an entire Buddhist canons were recorded on 729 stone tablets.

Proceed to Shwekyaungdaw "Golden Palace Monastery" to observe the finest Myanmar wooden architecture. Reward yourself with a fantastic sunset view after a challenging walk up the Mandalay Hill.

Overnight at Mandalay City Hotel. (B)

After breakfast at the hotel, transfer to the airport for your Heho-bound flight. Upon arrival at Heho airport, meet our driver and proceed to Inle Lake--the second largest natural lake in Myanmar.

Inle Lake is located in the middle of the greatest crater in Nyaungshwe valley between the two parallel mountain ranges running north to south in the southern Shan State.

Check in hotel, freshen up, and board on a traditional long motorized boat for a sightseeing tour of the lake. Be amazed by awesome Inle fishermen with unique one-legged rowing style-- one of a kind in the world, and only in Inle.

Observe floating farms [built up from strips of water hyacinth and mud which is anchored to the bottom of this shallow lake with bamboo poles], houses and monasteries on stilts, famous Phaungdaw Oo pagoda, housing five Buddha images, and local cottage industry.

In the afternoon, visit floating village of Ywama known for its floating market, where merchants sell their goods on boats to buyers including tourists, also on boats.

We will go to usual places to explore in Inle, including weaving village of Inpawkhon and Ngaphechaung, a museum-like monastery where old belongings of many monasteries are restored.

After breakfast at the hotel, transfer to the airport for your Yangon-bound flight. We will pick you up at Yangon airport, and take you to Scott's market-- a shopping place in Yangon that has existed since the colonial days.

You can either leisurely browse around rows after rows of souvenir shops with your own easy pace, go for a shopping spree, and bargain-hunt for the best Myanmar arts & crafts available there at reasonably low prices. The other items of interest to the typical tourists are jewelry, Lacquer wares, wood and ivory carvings, tapestries, silverware, brassware, silk and cotton fabrics, and shoulder bags.

Transfer to the airport in the late afternoon for your onwards departure flight. (B)

“Learn the culture of Myanmar at the heart of the country, and be amazed!”