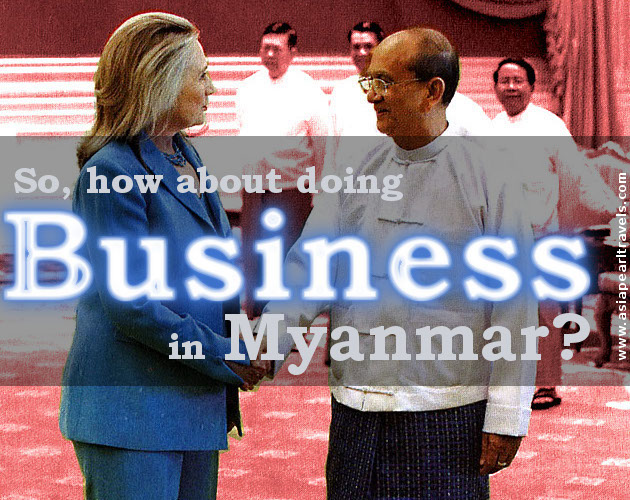 A-Z Services to foreigners in Myanmar

We also provide comprehensive services from A-Z to make your long term business stay in Myanmar convenient and productive.

NOTICE: Many years have passed since we started offering this service. It was a time when Myanmar was just opening up to the outside world. Time has changed since then. Foreign governments such as the British, US and Australia now are actively involved in advising companies from their respective countries for business related issues. Other areas including finding housing can now be easily done online. As such, we will be offering limited services in this area. This page first wrtten back in 2012 will not be updated for foreseeable future.

Yes, in Myanmar. To quote the US Secretary of State Hillary Clinton in the Spring 2012:

"Today we say to American business: invest in Burma and do it responsibly."

Corporate America is reaching out to the "final frontier" of the investment opportunities. The big corporations including Coca Cola, 7-eleven Stores, and Pepsi have already found high profile Myanmar business partners, and Myanmar consumers will be seeing their presence in the country within a year. We also expect to see the convenience of Visa Credit Cards in Myanmar just in time for 2013 Southeast Asian (SEA) Games.

Some of the heavy equipment such as medical equipment, machineries, and electric generators by General Electrics Company and Caterpillar have already reached the shores of Myanmar. As of today, some of US economic sanctions still exist that prohibit export of Made in Myanmar goods to the US, but not the other way around. US companies are allowed to export their products, goods, and services to Myanmar. On the other hand, Canada and European Union have already lifted all the economic sanctions on Myanmar.

In early 2011, we actually kept tracks of foreign leaders, especially from the Western democratic countries visiting this country because the new relations with Western countries are something new to Myanmar that we have never witnessed in over 50 years. High level State visits at that time included

and a stream of businessmen arriving the country to establish ties, relations, and connections.

Those are just a few examples of securing big business deals in Myanmar by going through high level connections. Today, we no longer keep tracks of foreign leadership and politicians making state visits, as those events have become a "norm".

But, what about investment by small to medium scale enterprises and entrepreneurs? Myanmar offers less expensive alternative to China, Vietnam, and Bangladesh to manufacture and export goods.

You need connections and consultations from people who understand how business works in Myanmar. That's where we can help you.