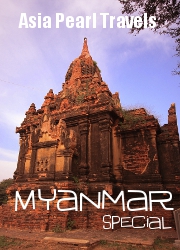 In just 5 days with this Myanmar Special tour, you will be visiting most of the popular tourist destinations in Yangon, Mandalay, Mingun, Bagan, and Inle including Shwedagon Pagoda, Mingun Bell, the World's Largest Book at Kuthodaw Pagoda, Ananda Temple, and "Jumping Cats" Monastery in Inle.

On arrival, our guide will meet you at the Yangon International Airport and transfer to your hotel. Yangon was formerly a village known as Dagon. In 1755, Burmese King Alaungpaya from upper Burma had captured it from the enemy Mon people after the final assault, and thereafter renamed the village "Yangon" which means "End of Strife".

We will first visit 75 meter long colossal reclining Buddha statue at Chaukhtatgyi, and spend a relaxing moment at Kandawgyi Lake, also known as the Royal Lake. Kandawgyi Lake is a natural body of water located in the city center, and is an excellent place for strolling and picnicking. This lake somehow seems to give a meditative feel of tranquility and timeless moment of freedom and peace, especially during the sunset, as the glittering image of Shwedagon pagoda is reflected in its calm waters.

Our next stop will be Botataung Pagoda featuring the enshrinement of a hair relic of the Buddha. If time permits, you may walk around Sule Pagoda and surrounding colonial style huge buildings built by the British during the 1900s. Lunch in a local restaurant.

After lunch, visit Bogyoke market, a famous shopping center formerly known as "Scott's Market" during the British days. Here, you have endless array of souvenirs for your whimsical shopping spree, or just browse around rows after rows of shops to appreciate the display of Myanmar superlative handicrafts.

Proceed to Shwedagon Pagoda, which in early March 2012 had celebrated two thousand six hundred year anniversary of its foundation. The golden dome rises 98 meters above its base and is covered with 60 tons of pure gold along with numerous precious stones such as jade, ruby, sapphire and diamond, including a 76 carat solid diamond on its top. Enjoy a fantastic sunset view from the hilltop.

After breakfast, depart Yangon with your Mandalay-bound flight. Mandalay, known as Rathanabon, or "the Gem" city is the capital of the last kingdom as well as the center of the Myanmar culture, tradition, arts and crafts. Skilled craftsmen of Mandalay are among the best in Myanmar; their finest works were once used by the royal courts.

Upon arrival at the Mandalay airport, meet your driver and proceed to Kyawzun jetty. Stop by a while to see water buffaloes (Natural mode of transport, the Burmese way) working with Myanmar teak wood (the best quality in the World), and watch busy riverside activities. 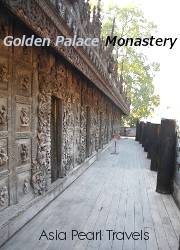 Board on a private boat and head for Mingun across Ayeyarwady river. Visit old-age home for the poor in Mingun. Observe Mingun bell, one of the world's largest ringing bells of all time weighing 90 tons and much older than the one in China produced by modern manufacturing method in the year 2000. Other tour highlights are Settawya Pagoda with a marble foot print of the Buddha; Pahtodawgyi, where an enormous pile of bricks is all that remains of King Bodawpaya's ambition, stopped half-way during construction by the astrologer; Mingun Village and Hsinbume Pagoda.

Return to Mandalay and lunch at a local restaurant. Hotel check in. Visit Payagyi to observe Mahamuni Buddha Image, the foot of Mandalay hill to see "the World's largest book" at Kuthodaw Pagoda, where an entire Buddhist canon is recorded on 729 stone tablets.

Visit Shwe-kyaung-daw "Golden Palace Monastery" to observe the finest Myanmar wooden architecture. Reward yourself with a fantastic sunset view from the hill after a challenging walk up the Mandalay hill.

Overnight in Mandalay at Great Wall Hotel. (B)

After breakfast, transfer to the airport for your Bagan-bound flight. Bagan is beautifully situated on the eastern banks of the mighty Ayeryarwady River, 190 km (120 miles) south of Mandalay. In the beginning of the 11th century, King Anawrahta made Bagan his Capital city.

Upon arrival at Nyaung U airport, our driver will take you to your hotel. Your archaeological tour commences after a short rest to freshen up.

Tour highlight: Shwezigon, well-maintained and renovated temple; Gawdawpalin, one of the largest and the most imposing Monument in Bagan; Ananda Temple, the best preserved masterpiece of Myanmar architecture; and nearby brick monastery, one of a few survived from the Classic Bagan period; Thatbyinnyu, the tallest temple in Bagan at 61 meters (201 feet); Natlyaungkyaung, the only surviving Hindu temple in Bagan; Dhammayangyi, the largest of them all;

Lunch at a local restaurant.

After lunch, we will introduce you to traditional Lacquerware making process in local workshops. Watch the process of making unique Myanmar souvenir. Next, Myinkaba Gubyaukkyi, an early Pyu period temple with old mural paintings of Hindu influence, and Manuha temple where captive king Manuha was imprisoned. We will have a panoramic sunset view of an entire ruin of Bagan from Shwesandaw temple built by King Anawrahta in 1057.

Overnight in Bagan at Thazin Garden Hotel. (B)

After breakfast, transfer to the airport for your Heho-bound flight. Inle Lake maintains the world's famous wetland ecosystem and is home to many migratory birds as well as home to the Inthas --'dwellers of the lakes' -- distinguished for the strange way they propel their boats using their leg as a fulcrum for the oar. Their homes are built on piles of crops and vegetation floating on the surface of the water; their fishing boats glide effortlessly with a gentle push of a leg.

Upon arrival at Heho airport, meet your driver and proceed to your hotel for check in. After freshening up, visit Phaungdaw Oo Pagoda housing five sacred and almost shapeless Buddha images, contorted by the weight of applied gold leaf-- gifts from the believers. The Buddha images were purportedly brought there in the 12th Century.

Lunch at a local restaurant.

In the afternoon, proceed to the floating village of Ywama, the lake's downtown, the silk weaving village of Inpawkhone and visit Ngaphechaung (the biggest and the oldest monastery around the Inle Lake).

Overnight at Paradise hotel in Nyaung Shwe. (B)

The above quotes are price per person and estimates only. Depending on payment method, banking institutions and PayPal may charge service fees. We will furnish you with quotations based on the latest exchange rate and hotels of your choice upon request.

“Not too short, not too long; discover the essence Myanmar in just 5 days. Make an inquiry now!”